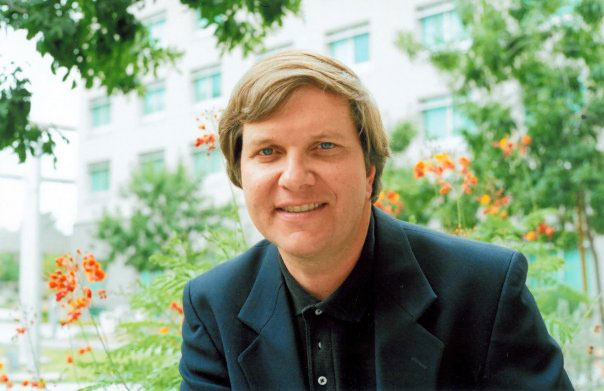 “The life of peace is both an inner journey toward a disarmed heart and a public journey toward a disarmed world,” Rev. John Dear writes in his book, Living Peace. “This difficult but beautiful journey gives infinite meaning and fulfillment to life itself because our lives become a gift for the whole human race. With peace as the beginning, middle and end of life, life makes sense.”

Rev. John Dear is one of the most well-known teachers and voices for peace and nonviolence in the world. In 2008, Archbishop Desmond Tutu nominated him for the Nobel Peace Prize saying, “John Dear is the embodiment of a peacemaker. He has led by example through his actions and in his writings and in numerous sermons, speeches and demonstrations. He believes that peace is not something static, but rather to make peace is to be engaged, mind, body and spirit. His teaching is to love yourself, to love your neighbor, your enemy, and to love the world and to understand the profound responsibility in doing all of these.

“He is a man who has the courage of his convictions and who speaks out and acts against war, the manufacture of weapons and any situation where a human being might be at risk through violence,” Archbishop Tutu continued. “For evil to prevail requires only that good people sit on the sidelines and do nothing. John Dear is compelling all of us to stand up and take responsibility for the suffering of humanity so often caused through selfishness and greed.”

Dear was born on August 13, 1959; attended Duke University; and entered the Society of Jesus in August, 1982. Shortly before entering the Jesuits, he traveled through Israel during Israel’s war on Lebanon. While camping out at the Sea of Galilee and visiting the Chapel of the Beatitudes, he witnessed Israeli warplanes swoop down over the sea and drop bombs a few miles away at the Lebanon border. He decided then and there to spend his life working for peace and disarmament and teaching the Beatitudes and the Sermon on the Mount.

He plunged himself into the peace movement, and in 1985 lived and worked in a refugee camp in El Salvador during the civil war under the direction of Jesuit Refugee Service and the Jesuits who were later assassinated in 1989. Over the years, he ran a homeless shelter in Washington, D.C.; taught at a Jesuit high school and at Fordham University; received two Master’s Degrees in Theology at the Graduate Theological Union in California; and was ordained in June, 1993.

In the 1990s, he arranged for Mother Teresa to speak to various governors to stop the death penalty, and helped prevent eight executions. He directed a large community center for African American women and children in Richmond, Virginia for several years, then lived in Belfast, Northern Ireland for his Jesuit sabbatical year, working in a human rights center. In 1998, he became executive director of the Fellowship of Reconciliation, the largest interfaith peace organization in the United States, and led Nobel laureates to Iraq, an interfaith delegation to Israel/Palestine, and the People’s Campaign for Nonviolence, forty days of teaching and actions in Washington, D.C. in 2000.

After September 11, 2001, he served as the Red Cross coordinator of chaplains at the Family Assistance Center, and counseled thousands of relatives and rescue workers there and at Ground Zero, while also organizing demonstrations in Times Square and elsewhere against the U.S. war on Afghanistan.

Dear has organized hundreds of demonstrations against war and injustice, and been arrested about 85 times for nonviolent civil disobedience. In December, 1993, he was arrested for hammering on an F-15 nuclear capable fighter bomber in Goldsboro, North Carolina for a “Plowshares” disarmament action, faced 20 years in prison, and spent nine months in jail and two years under house arrest.

After his 9/11 work, he moved to New Mexico in 2002 and became pastor of several churches in the impoverished high desert. He then began an annual vigil for nuclear disarmament outside the nuclear weapons National Laboratories in Los Alamos, New Mexico, birthplace of the atomic bomb, which was held every August for twenty years.

On August 6, 1995, he organized the national commemoration of the 50th anniversary of Hiroshima attended by over 2000 people at the National Cathedral in D.C. In 2013, along with actor Martin Sheen, he gave the opening keynote talk in Oslo, Norway, at the launch of ICAN, the International Campaign to Abolish Nuclear Weapons (and their U.N. movement to abolish nuclear weapons along humanitarian grounds), which won the 2017 Nobel Peace Prize.

In August 6, 2020, the 75th anniversary of Hiroshima and Nagasaki, he organized and hosted a national zoom workshop on nuclear weapons development which featured Archbishop Wester of New Mexico, Dr. Ira Helfand (of the Nobel groups Physicians for Social Responsibility and the Intl Campaign to Abolish Nuclear Weapons), and others.

In 2016, he left the Jesuits and joined the Diocese of Monterey, California, where he resides now. He participated in the April, 2016 Vatican Conference on Nonviolence in Rome, and was asked by Cardinal Turkson to draft Pope Francis’ Jan. 1, 2017 World Day of Peace message, the first statement on nonviolence in the history of the Catholic Church. He joined the staff of Pace e Bene and cofounded Campaign Nonviolence, a national week of action every September in the USA, around International Peace Day, Sept. 21, which has grown to include over 4000 actions across the U.S. in every state, against war, poverty, racism, nuclear weapons and environmental destruction. He also founded and directed the Nonviolent Cities project.

In 2020, he founded “The Beatitudes Center for the Nonviolent Jesus” where he currently offers zoom workshops and free podcasts on peace and the nonviolence of Jesus.  In 2022, he helped draft Archbishop John Wester’s pastoral letter calling for the abolition of nuclear weapons, the first such statement of its kind in US Church history.

He has been featured in The New York Times, The Washington Post, USA Today, The Sun, National Public Radio’s “All Things Considered” and elsewhere. For eight years, he wrote a weekly column for the National Catholic Reporter and Huffington Post, and is featured regularly on the national radio show “Democracy Now!” He is the subject of the DVD documentary, “The Narrow Path” (with music by Joan Baez and Jackson Browne) and is profiled in John Dear On Peace, by Patti Normile (St. Anthony Messenger Press, 2009).

He is the author of hundreds of articles on peace and nonviolence, and over thirty five books, including The Beatitudes of Peace, Praise Be Peace, They Will Inherit the Earth, Living Peace, The Nonviolent Life, Radical Prayers, Lazarus Come Forth, The God of Peace, Jesus the Rebel, Disarming the Heart, Peace Behind Bars, The Questions of Jesus, You Will Be My Witnesses, Our God Is Nonviolent, The Sound of Listening, Seeds of Nonviolence, Walking the Way, Thomas Merton Peacemaker, Transfiguration, Mary of Nazareth, and his autobiography, A Persistent Peace. His books have been translated into ten languages. He has edited books about Daniel Berrigan, Mohandas Gandhi, Mairead Maguire, Henri Nouwen, Richard McSorley and Horace McKenna.  He is the literary executor of Daniel Berrigan and chairs the Daniel Berrigan Literary Trust (see: www.danielberrigan.org), and on the national advisory boards of Veterans for Peace, and the Annual Selma March. He has received many awards, including the Pacem in Terris award and the Courage of Conscience award.

“Active nonviolence offers you and me a way out of the world’s mad violence and a way forward into the light and life of God’s peace,” Dear writes in his book, The Nonviolent Life. “It invites us to reject violence once and for all. It suggests that we no longer need to nurture violence within us, or manifest violence toward others, or treat animals and the earth violently, or remain powerless in the face of the world’s systemic injustice, warmaking, nuclear weapons and destructive policies. We have a power at our disposal, a weapon of love and truth that we are still just learning.

“With nonviolence, as Gandhi and King insisted, the days of violence are coming to an end,” Dear writes. “With every choice and action for nonviolence, we begin a new era in human history. This new age will be rooted in the best of spirituality, theology, and morality, the best in all of us for all of us. As we deepen nonviolence in every aspect of life, we herald the coming of a nonviolent world, a world without war, racism, hunger, killings, executions, nuclear weapons, or environmental destruction. There can be no better use of our lives. Along the way, we fulfill our calling to become sons and daughters of the God of peace.”

“John Dear’s is a beautiful message of peace.”
–Anne Lamott

“The Catholic social justice tradition, particularly the part condemning weapons production, easy resort to violence, and modern warfare, is often referred to as the church’s best kept secret. Few in the church work harder at bringing that tradition to the fore than Father John Dear. A prolific writer and tireless activist, he has written more than 30 books and been arrested some 75 times in acts of civil disobedience, all the while traveling nonstop, it seems, to give lectures on peacemaking throughout the country.”
–The National Catholic Reporter

“To take care of each other should be our primary concern in this twenty-first century, and Father John Dear is steady on this course.”
–Thich Nhat Hanh

“John Dear not only talks about Jesus, he lives Jesus–radical, loving, nonviolent Jesus. He prisms Jesus through his own life and brings us into the adventure.”
— Sister Helen Prejean

“John Dear has the gift to capture the social gospel as Jesus and the apostles proclaimed it. His writing is in the tradition of Thomas Merton, Henri Nouwen, and Daniel Berrigan.”
— J. Christoph Arnold, The Bruderhof

“John Dear’s inspired journey–inside and out–gives us renewed hope for our own personal and public peacemaking.”
— the late Fred Rogers, TV star of “Mr. Rogers’ Neighborhood”

“John Dear has walked where holy words lead: to a high mountain of instruction, into the desert of forty days, into the garden of anguish. He has poured his blood on nuclear weaponry and has paid up in kangaroo courts and unspeakable jails. He has trekked about the world bearing the gospel in hand and heart, a wing-shod messenger of peace. He has lived in solidarity with the wretched of the earth–whose plight, as he well knows, is the mean feat of abominable economics and killer instincts on rampage. In this century, in this land, cleft in fragments of gigantic disorder, what a witness!”
–Daniel Berrigan

“John Dear has been arrested in the cause of peace and human decency more times than anyone else I know. I am honored to consider him a friend.”
-Joan Baez

“John Dear’s extraordinary autobiography, A Persistent Peace, reaches its climactic scene when a National Guard unit, prior to going to Iraq, stands in the early morning outside the door of his parish in New Mexico, where he has been preaching against the war, chanting ‘One bullet, one kill!’ His life might well be summed up by that scene: a priest whose commitment to nonviolence and peace carries him to El Salvador, the Middle East and all over the United States, and whose protests land him in jail again and again. His deep faith and steadfast devotion to the principles of Jesus, Dorothy Day, Thomas Merton and Daniel Berrigan, lead him to defy the authority of hierarchies, whether in his church or in the nation, and hold fast to his beliefs even when soldiers, chanting threats, show up at his door. John Dear’s life story is inspiring and heartwarming.”
—the late Howard Zinn, author of “A People’s History of the United States”

“The Beatitudes and the Sermon on the Mount are Jesus’ blueprint for peace. I urge everyone to study John Dear’s beautiful reflections [“The Beatitudes of Peace”] and join his campaign of peace and nonviolence.”
—President Jimmy Carter