LOS ALAMOS, N.M. Ellie Voutselas, 78, pulled from a cardboard box the sacks she had fashioned into ponchos, slicing holes in the burlap for the head and arms. Cayla Turain, 22, grabbed hers, smudged ashes on her face, and joined a silent march for peace.

On Aug. 6, 1945, a B-29 bomber dropped an atomic bomb over Hiroshima, Japan, incinerating tens of thousands on the ground. Seventy years later, Ms. Voutselas, Ms. Turain and about [250] others marched toward the secured entrance to the Los Alamos National Laboratory, where the bombs that ravaged Hiroshima and, three days later, Nagasaki, had been conceived.

“My generation might be the one that’s going to have to grapple with the question, to nuke or not to nuke?” Ms. Turain, a graduate student from Fort Collins, Colo., said Thursday. “I came here looking for answers.”

From a stage at the Ashley Pond Park, Rev. John Dear, the Catholic priest who organized the protest and a self-described “nonviolent troublemaker” â€” he says he has been arrested 75 times in acts of civil disobedience against war and was once convicted of striking an F-15E fighter-bomber with a hammer inside a military base – offered his answers.

“All roads lead to Los Alamos,” Father John Dear said. “This is the place that taught us that we can destroy one another, destroy the world, and it’s really important for us to understand how our history feeds our violence.”

While residents here seemed to understand, and tolerate, the protest, none of them joined. Some watched with indifferent curiosity, ignoring the message even as it condemned the laboratory that is their town’s lifeblood – and where research today reaches far beyond nuclear weapons, into fields like climate change, geothermal energies and cancer treatment.

Near the protesters sat Margie Lane, 89, who vividly recalled the news of the bombings and “that feeling,” she said, “that the world was no longer safe.”

Her perspective on Los Alamos and its laboratory was decidedly benign. Mrs. Lane has lived here for 38 years and her husband, now dead, worked as a mechanical engineer at the lab, a job that paid the bills and gave him purpose. “He built the gadgets the scientists conceived,” she said.

Jeff Casados, 65, a lifelong resident, said his father was one of the lab’s early scientists, doing some type of classified work, and he worked there too, on an accelerator of subatomic particles used in certain forms of cancer therapy. He said it was easy to condemn the lab when all one knows about it is its “crazy history.”

“We’re not all pro-nukes and pro-bombs,” said Mr. Casados, who retired two years ago and had come to observe the protest. “I worked to save lives, and I’m very proud of that.”

These days, the laboratory is a place of contrasts, much like its hometown. Perched on a plateau on the Jemez Mountains, Los Alamos offers stunning panoramas – mountains chiseled by volcanic eruptions on one side, hillsides speckled with pine trees on the other, the ground still scarred by wildfires that have come close to burning the town. With its strong public school system, an overwhelming number of residents with doctoral degrees and one of the nation’s highest concentration of millionaires, Los Alamos is rich and highly educated, an anomaly in the state.

New Mexico, one of the poorest states in the country, is heavily reliant on its military bases and government research centers. Los Alamos and the Sandia National Laboratories in Albuquerque are among the top 10 employers in the state, which received $27.5 billion in federal money in 2013, according to a recent report by the Pew Charitable Trusts. About a quarter of the money paid for contracts, many of them for defense work developed at the labs.

But the relationship has come at a price. For years, lab workers used bunkers and canyons around Los Alamos as dumping grounds for radioactive materials – and trace amounts are still embedded in rocks and soil despite millions of dollars in cleanups. 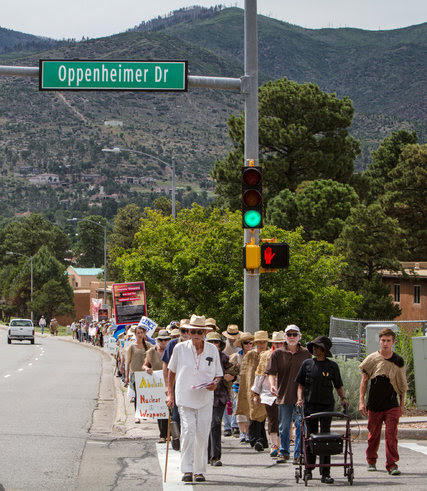 The marchers in Los Alamos on Thursday. Credit Mark Holm for The New York Times

Last year, plutonium waste leaked from a drum stored at the laboratory. In April, the federal Energy Department agreed to spend $73 million to improve transportation of nuclear waste from Los Alamos to the nation’s only permanent underground repository for such materials, in southeastern New Mexico, where a leak exposed 17 employees to radiation.

In announcing the agreement, Gov. Susana Martinez described Los Alamos and the repository known as the Waste Isolation Pilot Plant as “critical assets to our nation’s security, our state’s economy, and the communities in which they operate.”

For the protesters, though, they are reminders of the past and worrisome signs of what the future may hold.

“Why would they do this?” Kaitlyn Altizer, 12, asked her parents, Mary and Don Heath, pastors at Trinity Christian Church in Edmond, Okla., after she learned about the bombs for the first time. The family was in New Mexico for a four-day peace conference, which begins and ends with protests here, to mark the dropping of the bombs over Japan.

Thursday’s march led with banner that read, “1 Hiroshima = 100 Auschwitz.” The group walked west on Trinity Drive, named after the bombs’ test site, about 200 miles south of Los Alamos; crossed Oppenheimer Drive, named after J. Robert Oppenheimer, the scientist who led the bomb’s development; and passed the Richard P. Feynman Center for Innovation, which honors a Nobel Prize-winning theoretical physicist who worked on the Manhattan Project, the atomic bombs’ classified program.

The protesters paused for 15 minutes of silence along the walk. A man sat in a lotus position under the shade of a tree, his eyes closed in meditation.

Back at the park, they spread out on the lawn to hear Rev. James Lawson, the mastermind of lunch-counter sit-ins in Nashville in 1960 and other demonstrations during the Civil Rights era. Rev. Dr. Martin Luther King Jr., a close friend, described him as “the leading theorist and strategist of nonviolence in the world.”

Rev. Lawson was 17 when the bombs fell in Hiroshima and Nagasaki, a rising high school senior in Massillon, Ohio, and a member of the speech and debate team, whose question that year was, “Does the atomic bomb make mass armies obsolete?”

Riding to Los Alamos with Father John Dear, who has been nominated multiple times for the Nobel Peace Prize, Rev. Lawson said, “Today’s weapons of mass destruction are nothing but the evolution of our understanding of violence.”

“What do you mean by that?” Father John Dear asked.

Rev. Lawson answered, “The bomb has given the human race the power to annihilate itself.” Evoking last year’s killings of Tamir Rice, 12, in Cleveland and Michael Brown, 18, in Ferguson, Mo., he added, “The police officer who shoots an unarmed boy or sees a young man as a demon rushing at him represents the same lost regard for human life we learned with the bomb.”